So says Mark Watney, lead character in the best-selling book and soon to be released movie The Martian starring Matt Damon and Jessica Chastain. Faced with death, Watney had compelling motivation to become an expert in survival on Mars.

I was curious about how a non-engineer learned enough to write such an accurate book. (According to NASA; I wouldn’t know.)

Why am I interviewing a sci-fi author for Big Thinkers, Big Ideas? Because the technology referenced in the book is pretty sophisticated and accurate. I am interested in how Andy, and people in general, learn enough to be a “nex’pert” or even an expert in a technical domain not their own. Maybe Andy’s preparations for writing The Martian can shed some unexpected light on how we learn and apply knowledge. 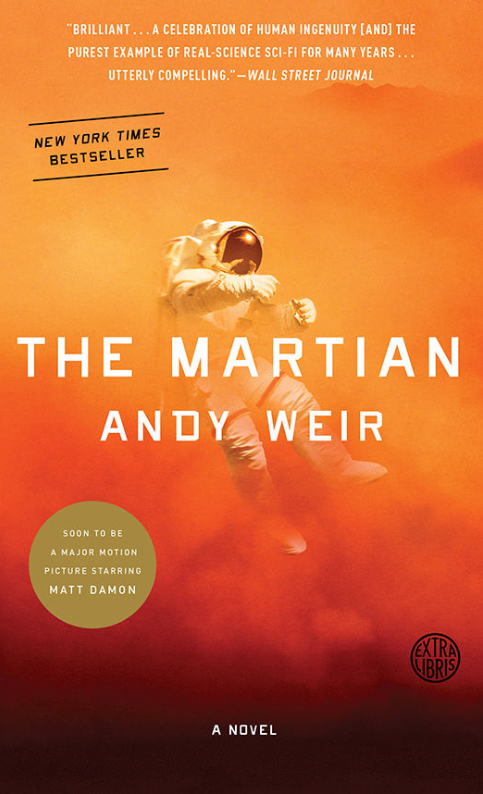 First, a little bit about Andy. He was born and raised (with a father who is a particle physicist) in California, where he resides today. At the age of 15, he began working as a computer programmer for Sandia National Laboratories. Since then, Andy has worked as a programmer for several software companies, including AOL and Blizzard, where he worked on Warcraft 2.  He is also a lifelong space nerd and a devoted hobbyist of subjects like relativistic physics, orbital mechanics, and the history of manned spaceflight. The Martian is Andy’s first novel.

CARLA: Without being a spoiler for those that have not read it, could you summarize the plot of The Martian?

ANDY WEIR: The Martian is about an astronaut named Mark Watney who is part of the third manned-mission to Mars. A violent dust storm forces the crew to abort the mission and leave the planet. During the evacuation, Mark is struck by debris and the crew believes he had been killed and leaves without him. But, Mark isn’t dead. They left, and now he’s stranded on Mars.  Everyone thinks he’s dead.  Mark doesn’t have any way to communicate with Earth or with his crew, who are on their way back to Earth. He has to try to survive with just the equipment that’s there.

We know that adults learn best when presented with a problem they care about. The character Mark Watney certainly had a strong motivation to learn – or die.  Even though Mark, Weir’s alter ego, was a botanist with a strong background in science, he had to solve all kinds of engineering problems. For me it was a fascinating case of watching how a motivated and prepared novice learns. Andy Weir, a non-engineer, found himself in the same position when he set out to write a fun, but accurate, science fiction story.

So I asked Andy how he learned enough to write the book.

CARLA: Andy, you have a strong foundation of orbital dynamics, physics and programming.  What are some of your research sources and what’s your process?

AW: For research, I mostly did Internet searches, did a lot of Googling.  I didn’t know anybody in aerospace at the time that I wrote the book.  I did have a strong foundation of knowledge to start with because I’ve been a big fan of space travel my whole life.  I’m not an expert by any stretch of the imagination, but I know more than the layman just because it’s my hobby and my interests.  For the most part, it’s just elbow grease -- lots of Google searches, reading and doing the math.

CARLA: Andy, many of your readers aren’t technical -- I know I’m not.  I may be a hobbyist, but nothing like you are.  I know the book is on Audible, too. The people who narrate books aren’t technical either. I heard there was cute novice’s blooper as a result.

AW: The audio version is awesome.  It’s narrated by R.C. Bray.  He did a fantastic job. [But] nobody involved in the audiobook production was a computer programmer.  So, there is a mention in the book of ASCII, which is a character encoding format used by computers.  It’s spelled that way and it’s all capital letters and it stands for American Standard Code for Information Interchange. [It is pronounced ask-ee.] When they saw that in the audiobook, they read it as A-S-C-2 because they thought it meant Roman numeral II.  After Random House picked it up and we went through the editing process, the audiobook publisher, Podium Publishing, wanted the audiobook to exactly match the current version of the book.  And so they re-recorded it for that purpose and when they did, and they also fixed the ASCII thing.

CARLA: Yeah, that was an embarrassing blooper.  I think the people listening can relate to that.  That’s what novices do.  That’s why you have to be so kind to people when they’re in the learning process.

You can also check out the rest of my Big Thinkers, Big Ideas interviews on APQC’s Knowledge Base. You can read the full Andy Weir interview.

APQC members who want to learn more about what KM at NASA is all about can go here: