Recently, APQC has been sharing its latest leadership research to shed insight into today's leadership deficit. Today, we share guest blogger Jonathan Verney's take on outdated leadership ideas. Verney is the lead writer and creative strategist at The Corporate Storyteller. Find his thoughts below.

CEOs are the racehorses of the business world. They move fast, they’re accustomed to finishing first, and they often wear blinders to avoid distractions and stay focused. And that may be a problem, because today’s CEOs face a wider and deeper set of challenges than ever before. At the same time, studies show that they are no more prepared to cope with change or create cultures of innovation than their predecessors. And from my perspective, they fail to tell the right stories, despite assuming the mantle of storyteller-in-chief.

I noted in a previous post that CEOs need to be better storytellers. But it’s difficult to talk the talk if the talk is framed by a leadership style that no longer fits the evolving organization. In fact, the need for a new kind of leadership style that is more inclusive, flexible, innovative and open has never been greater, and a recent study by the American Productivity and Quality Center seems to confirm this. Among other things, the APQC study, entitled The Leadership Deficit, reveals the need for a new type of leadership style, and this new style includes a new approach to storytelling.

After talking with some of the people at APQC, I’ve begun to realize that leaders may need to take the blinders off and see their leadership style for what it is: old fashioned, out of sync, and most importantly, increasingly ineffective. Employees are turning off, tuning out and disengaging. And that doesn’t bode well for CEOs or stakeholders.

Why do so many CEOs appear to be out of touch, and what can they do to turn things around? First, we need to understand that traditional leadership models are deeply embedded into corporate culture. According to the APQC survey, development and incentive practices at many of the world’s largest corporations are increasingly archaic as knowledge sharing and collaborative teams replace the silos that came to dominate twentieth century corporate life.

Nearly three quarters of the 545 of the business leaders and managers who responded to the APQC survey (many of whom have been with their firms for a decade or more) believe their own leadership development programs actually encourage an outdated leadership style (see Figure 1). 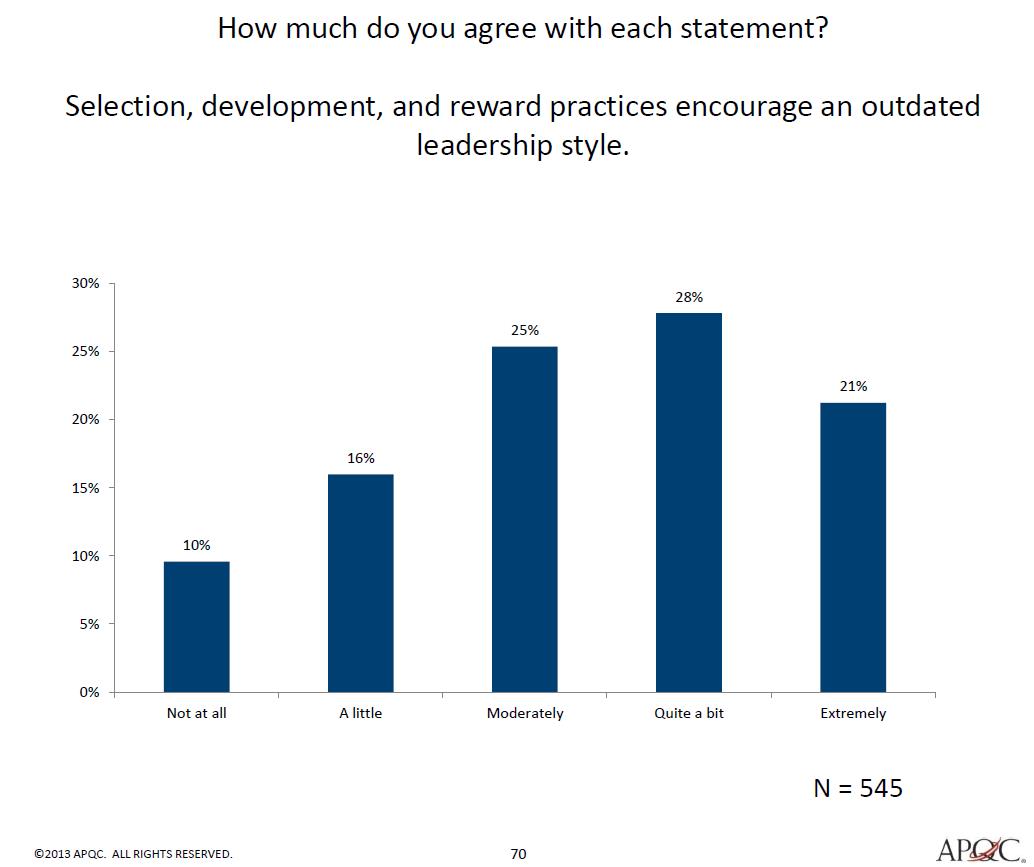 Many readers will remember the infamous 2011 Gallup poll that reported 70 per cent of American employees are disengaged from their work. It seems clear that leaders can more effectively engage employees and give them more “ownership” of their work by dispensing with the traditional model of leadership (one tending to be closed and hierarchical) and replacing it with a dynamic leadership style (one tending to be open and collaborative).

Today, even cutting-edge products are not enough to ensure customer loyalty. Customers are stepping up demands for integrated solutions to their problems. While companies have developed new strategies for meeting those demands, many have yet to change their thinking about what constitutes effective leadership in this environment. – Douglas Ready, Founder of ICEDR, The International Consortium for Executive Development Research.

Change is hard, especially if the CEO is closed-off. After all, what’s the incentive to change? Well, for starters, an improved bottom line. The more they engage in open, two-way dialogue with their employees (and customers), the more likely they are to gain “street level” insights and valuable competitive intelligence they would otherwise miss. This lack of peripheral vision may help explain why CEOs are so poor at effective strategic planning and change management, two critical leadership skills that require amassing and absorbing multiple perspectives and viewpoints.

“Too many CEOs have allowed the strategic vision to be nothing more than slogans on a piece of paper rather than guidance informing all key decisions.”– Joel Trammell, CEO, Khorus Software

APQC’s study found “many and big” leadership skills gaps in other leadership areas as well, including knowledge sharing, listening skills and emotional intelligence. In fact, the only leadership skill that wasn’t lacking, according to the study, was “authoritativeness”.

If indeed this is the case, it’s not hard to draw the conclusion that many of today’s supposedly forward-thinking CEOs are actually far behind the curve instead of ahead of it. And perhaps the most troubling aspect, according to the APQC survey is that their managers and employees know it and must deal with it. Many leadership surveys have been conducted that show leaders put plenty of focus on cost and the bottom line. What seems to get short shrift is big picture thinking that goes beyond the next quarter.

“One of the most counterproductive rules in business is to distribute information on the basis of "need to know.” – Sirota, Mischkind & Meltzer, Harvard Management Update, Vol. 11, No. 1, Jan. 2006

What can CEOs do to change the script?

Will it be easy to convince CEOs to chuck their traditional playbook for a more dynamic one? Probably not. Successful executives are notoriously hesitant to change their behaviors because they often connect those same behaviors to their success (cause and effect), says executive development coach Dan McCarthy. “Sometimes they are right, sometimes they are successful in spite of some ineffective behaviors, and sometimes new challenges require a different set of skills and behaviors,” McCarthy says.

One of the biggest obstacles to making a leadership style change is time, and “time-saving” technology like smartphones and computers may be creating a bigger problem than they solve. “Most CEOs today admit, in private at least, feeling overwhelmed by their own to-do lists,” says economist Noreena Hertz in the Wall Street Journal. “Email overload is a widespread problem, stress levels are reaching new heights, the ‘urgent’ crowds out the ‘important’.”

The most successful CEOs learn to delegate the urgent and focus on the (strategically) important, which includes the CEO’s most overlooked task: telling the right story. Forbes magazine says that 65% of organizations have an agreed-upon corporate strategy, but only 14% of employees understand the strategy. Could weak storytelling be the culprit? A few years ago, McKinsey & Company told the story of a bank that couldn’t get its change story right and paid a huge price – until they took the time to craft a story that explained the why, not just the what. That story, and the leadership lessons behind it, is the subject of the next post.

Jonathan Verney is The Corporate Storyteller, co-author of Feed the Startup Beast (a marketing manual for entrepreneurs) and blogs about The Five Rules of Business Storytelling.

Sue Lam’s research focuses on human capital management (HCM). In her role as a research specialist, she uses APQC's benchmarks, metrics, and predictive analytics to uncover insights from data and leverages qualitative case study research to identify real-world practices and solutions that back up the data.