APQC recently sat down with Paul J Corney to discuss how using the Pause & Reflect method following an event can help teams better articulate their lessons learned and improve engagement among team members.

Paul J Corney is an advisor, business manager, coach, facilitator, and project director. He has worked with finance, software, and reinsurance companies as an information and knowledge advisor. You can read his blog Knowledge et al and follow him on Twitter @pauljcorney.

Paul, when you discuss Pause Reflect & Debrief, one of the first things you talk about is the importance of choosing a venue.

A Firstly thank you for the opportunity to talk to your readers. This question is timely as on Tuesday I ran a workshop for a group of information and knowledge professionals in the UK entitled Why Space Matters for Innovation and Information and Knowledge Sharing. In that session I drew on surveys conducted in 2002, 2013, and 2014 among prominent KM practitioners in which they had to answer six simple questions including, “How does where you work reflect the way you work?”

Here are a few of the responses in chronological order.

From the numerous answers it is clear that where people work impacts how they work.  Choosing an environment that encourages open and honest dialogue is hugely important.

When reflecting on a project and trying to figure out “lessons learned,” can you talk about why where you have the debriefing session can be hugely important and why sometimes it’s overlooked?

After a change at board level a friend of mine was recently “let go” after 17 years in a senior role. He knew it was coming and had prepared accordingly. The morning of the denouement he was asked to come up to a room with no inward-facing windows. It is euphemistically known as “chop chop square” (a reference to my Mid East experience!). The environment set the tone of that meeting—there was only one outcome and it was set up for confrontation.

Whereas a Pause & Reflect should be about celebration of what went well, what can we build upon and led from that perspective. It should not be seen as a chore but as something that improves “the way we do things around here.” So the environment needs to be light and airy with plenty of room to move around.

Here’s an example of a room not to hold a Pause & Reflect in: 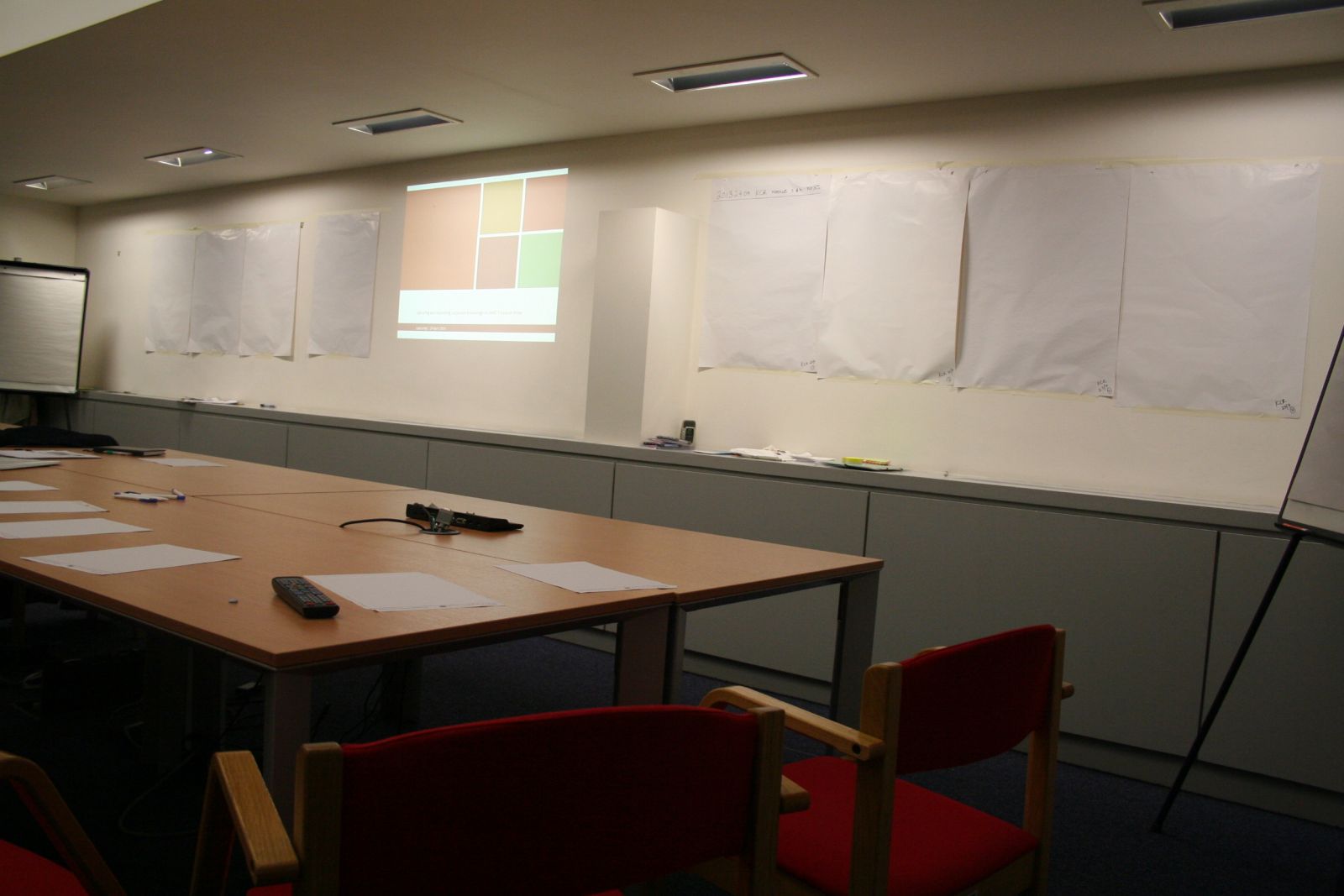 You mention how, when trying to gather lessons learned during a Pause & Reflect, you need to be clear on what people’s roles will be during the session.  Why is this important?

How often have you attended a meeting where you are not sure why you are there or what you are supposed to do as a result? Its like the cc on an email—invite a crowd and hope something will stick. One of the best “tools” I acquired while working in Minneapolis helping to launch a dot-com company in 2000 was a great meeting agenda “Meetings Matter.” It set out in a non-confrontational way who is attending (and why), what the purpose is, and what the expected outcomes are. I’ve used adaptations of it ever since, as have clients.

So I always set out at the beginning what the role of each attendee is (noting that everyone has something to contribute as each sees an event through a different lens).

In your experience, why use pictures and objects from an event during a debriefing? Can you give an example?

For me it’s a no brainer.  Neutral space and objects are triggers that open up conversation, which in turn allows insight to emerge. I’ve been using a timeline for many years and asking people to write on it because it acts as a focal point. You might find the blog post I wrote about this of interest. Entitled when Siberia and Bangkok meet: conducting a cross cultural debrief, it describes how I used a timeline to get different reflections on an event from a group from Russia and Thailand.

On other occasions I have asked people I am interviewing to bring along an object or image that illustrates an event or incident for them. In fact, for the annual meeting of Save The Children in Bangladesh (which I was delighted to play a role in helping to set up), the delegates were asked to put three images on a timeline that they used to illustrate their year.

I recently ran a session for the charity I am a founding trustee of.  In fact I am the knowledge trustee as we’ve recognized our role as knowledge arbitrageurs making use of surplus food from restaurants, cafes, and retailers and donating it to charities and other groups that help feed those who are struggling to make ends meet. Plan Zheroes runs CSR Days for large organizations who encourage their staff to do volunteer time.  At the end of each we run a Pause & Reflect for their volunteers.  In addition, I also conducted a session among our team (with input from “our clients”) to see how we might improve future events.

In your writing, you mention “the power of three” and your belief that less is more when looking back

I’ve been coaching people for some time and have always extolled this as a mantra. I have discovered that our capacity to retain ideas we hear others speak about is limited. Recently I had a request from a friend in Khartoum to help her with a workshop she is running in Asia in a month’s time. She sent me materials for review and I asked her to consider that English is neither her first language nor that of the audience.  Her messages needed to be clearer and more concise—I reiterated my “less is more” philosophy, a phrase incidentally I first heard used by Gerry McGovern (one of the clearest presenters and thinkers on web design). I suggested she work on the three things she wanted people to take away from the event, to tell them that up front, tell them during the presentation, and then tell them again at the end.

The other point I’d make here is courtesy of Professor Victor Newman, who developed a process used by the British Council called Baton Passing. It came about after he’d attended a debrief with a previous employer in Asia and over a day and a half 200 “lessons” were identified.  While it satisfied the process, everyone knew no one would take any action as a result.

My final comment here would be: If you can’t write the action points and learnings down on a postcard then you have too many. The key point is lessons have to be acted upon; otherwise why bother capturing them!

Obviously in a debriefing there will usually be discussion of things that went wrong, but you say: “Don’t be afraid to let the silence hang in sticky moments—behaviors often emerge slowly.”  Can you explain what you mean?

I was in El Fashar Darfur in the regional office of WHO interviewing a German doctor as part of an exercise to identify how a knowledge strategy might be grounded in a humanitarian crisis. It was a small room with a fan gently humming in the background trying to keep the 40c temperature out. Having laid out a timeline around the construction of a field clinic in a matter of fact way, she paused when I asked a question about the people she was helping. After an eternity she revealed that rebels destroyed the hospital the day after it was opened. It was her trigger to talk about the challenges of working in that environment, all key learnings for us.

Someone once told me we have two ears and one mouth and should use them in that proportion. It’s something I aspire to but struggle with!

In your experience, is there one thing that all great debriefings have in common that allows them to be productive?